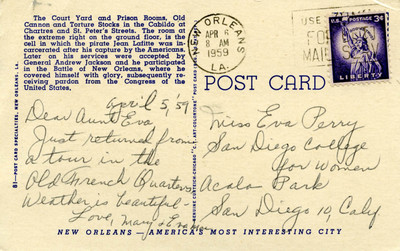 Courtyard and Prison Rooms in the Cabildo, New Orleans, La. The Court Yard and Prison Rooms, Old Cannon and Torture Stocks in the Cabildo at Chartres and St. Peter's Streets. The room at the extreme right on the ground floor, is the cell in which the pirate Jean Lafitte was incarcerated after his capture by the Americans. Later on his services were accepted by General Andrew Jackson and he participated in the Battle of New Orleans, where he covered himself with glory, subsequently receiving pardon from the Congress of the United States. New Orleans – America's Most Interesting City