Panama – A Freak of Nature at Panama 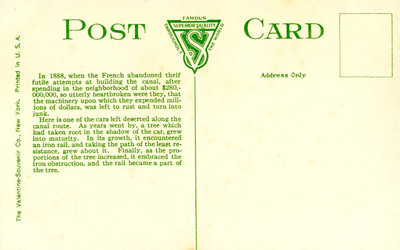 In 1888, when the French abandoned their futile attempts at building the canal, after spending in the neighborhood of about $280,000,000, so utterly heartbroken were they, that the machinery upon which they expended millions of dollars, was left to rust and turn into junk. Here is one of the cars left deserted along the canal route. As years went by, a tree which had taken root in the shadow of the car, grew into maturity. In its growth, it encountered an iron rail, and taking the path of the least resistance, grew about it. Finally, as the proportions of the tree increased, it embraced the iron obstruction, and the rail became a part of the tree.