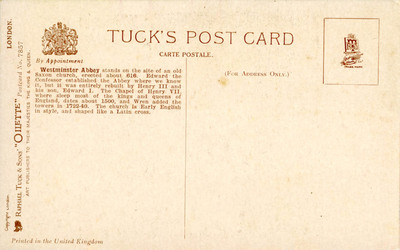 Westminster Abbey stands on the site of an old Saxon church, erected about 616. Edward the Confessor established the Abbey where we know it, but it was entirely rebuilt by Henry III and his son, Edward I. The Chapel of Henry VII where sleep most of the kings and queens of England, dates about 1500, and Wren added the towers in 1722-40. The church is Early English in Style, and shaped like a Latin cross.