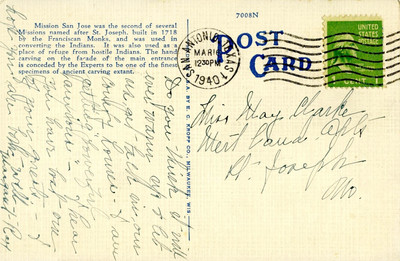 Tower and Carved Window of San Jose, Second Mission, Built 1718 – San Antonio, Texas – Mission San Jose was the second of several Missions named after St. Joseph, built in 1718 by the Franciscan Monks, and was used in converting the Indians. It was also used as a place of refuge from hostile Indians. The hand carving on the facade of the main entrance is conceded by the experts to be one of the finest specimens of ancient carving extant.