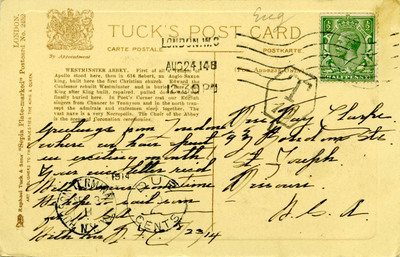 Westminster Abbey. First of all a Temple of Apollo stood here, then in 616 Sebert, an Anglo-Saxon king, builthere the first Christian church. Edward the Confessor rebuilt Westminster and is buried here, and King after King built, repaired, pulled down and was finally buried here. In Poet's Corner rest our English singers from Chaucer to Tennyson and in the north trasept the sdmirals and statesmen sleep together. The vast nave is a very Necropolis. The Choir of the Abbey is the scene of Coronation ceremonies.