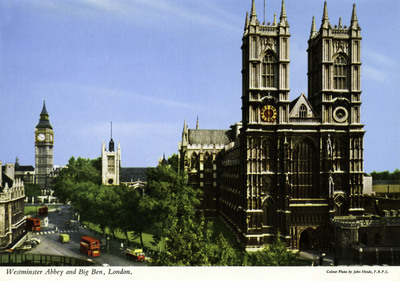 Westminster Abbey and Big Ben: Westminster Abbey, )founded by Edward the Confessor) was mainly built by Henry III in the 13th century as a fitting burial ground for English Sovereigns. Here the Kings and Queens of England are crowned;here are the graves of such famous men as Handel and Dickens, Newton and Stevenson, as well as memorials to those who lost their lives in the two world wars. Big Ben, the most popular landmark in London, stands in the background.

One color postcard with a divided back. The postcard was published by John Hinde in London, England and printed in the Irish Republic.