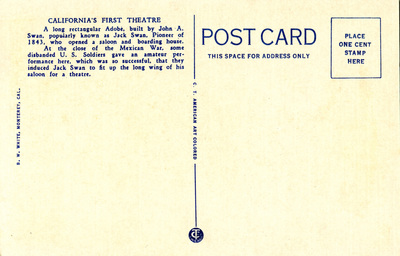 California's first theatre - A long rectangular Adobe, built by John A. Swan, popularly known as Jack Swan, Pioneer of 1843, who opened a saloon and boarding house. At the close of the Mexican War, some disbanded U.S. Soldiers gave an amateur performance here, which was so successful, that they induced Jack Swan to fit up the long wing of his saloon for a theatre.