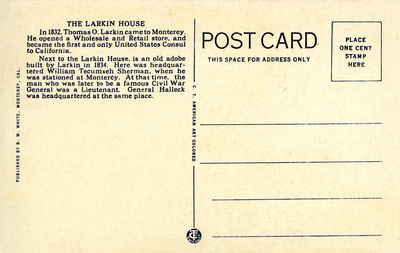 The Larkin House - In 1832, Thomas O. Larkin came to Monterey. He opened a Wholesale and Retail store, and became the first and only United States Consul to California. Next to the Larkin House, is an old adobe built by Larkin in 1834. Here was headquartered William Tecumseh Sherman, when he was stationed at Monterey. At that time, the man who was later to be a famous Civil War General was a Lieutenant. General Halleck was headquartered at the same place.