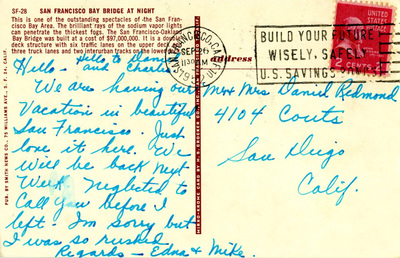 San Francisco Bay Bridge at night - This is one of the outstanding spectacles of the San Francisco Bay Area. The brilliant rays of the sodium vapor lights can penetrate the thickest fogs. The San Francisco-Oakland Bay Bridge was built at a cost of $97,000,000. It is a double deck structure with six traffic lanes on the upper deck and three truck lanes and two interurban tracks on the lower deck.