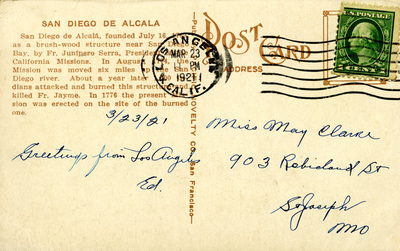 San Diego de Alcala San Diego de Alcala, founded July 16, 1769 as a brush-wood structure near San Diego Bay, by Fr. Junipero Serra, President of the California Missions. In August 1774, the Mission was moved six miles up the San Diego river. About a year later 1,000 Indians attacked and burned this structure and killed Fr. Jayme. In 1776 the present Mission was erected on the site of the burned one.