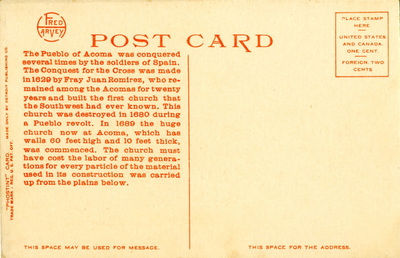 The Pueblo of Acoma was conquered several times by the soldiers of Spain. The Conquest for the Cross was made in 1629 by Fray Juan Romirez, who remained among the Acomas for twenty years and built the first church that the Southwest had ever known. This church was destroyed in 1680 during a Pueblo revolt. In 1689 the huge church now at Acoma, which has walls 60 feet high and 10 feet thick, was commenced. The church must have cost the labor of many generations for every particle of the material used in its construction was carried up from the plains below.