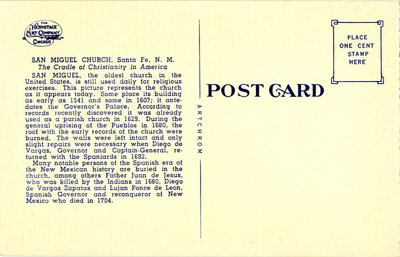 This card represents the oldest church, Santa Fe, New Mexico, as is was up to 1872. The San Miguel Bell was in the tower up to that year, as old photographs prove. The upper portion of the triple tower fell in 1872, but was rebuilt, as now seen, in 1888. The old church is built of large sun-dried bricks; the walls, which are covered with a layer of mud, both inside and outside, are from three to five feet thick.