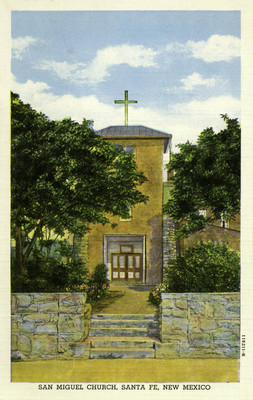 San Miguel Church, Santa Fe, N.M. The Cradle of Christianity in America San Miguel, the oldest church in the United States, is still used daily for religious exercises. This picture represents the church as it appears today. Some place its building as early as 1541 and some in 1607; it antedates the Governor's Palace. According to records recently discovered it was already used as a parish in 1629. During the general uprising of the Pueblos in 1680, the roof with the early records of the church were burned. The walls were left intact and only slight repairs were necessary when Diego de Vargas, Governor and Captain-General, returned with the Spaniards in 1692. Many notable persons of the Spanish era of the New Mexican history are buried in the church, among others Father Juan de Jesus, who was killed by the Indians in 1680, Diego de Vrags Zapatas and Lujaan Ponce de Leon, Spanish Governor and reconqueror of New Mexico who died in 1704.

One color postcard with a divided back. The postcard was published by The Hermitage Art Company in Chicago, Illinois.