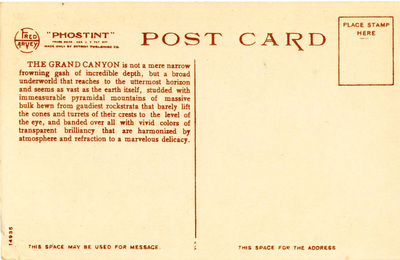 The Grand Canyon is not a mere narrow frowning gash of incredible depth, but a broad underworld that reaches to the uttermost horizon and seems as vast as the earth itself, studded with immeasurable pyramidal mountains of massive bulk hewn from gaudiest rockstrata that barely lift the cones and turrets of their crests to the level of the eye, and banded over all with vivid colors of transparent brilliancy that are harmonized by atmosphere and refraction to a marvelous delicacy.